In Memorian of Walter Franke

In Memoriam of Walter Franke
By Dominik Schmitz ©2017 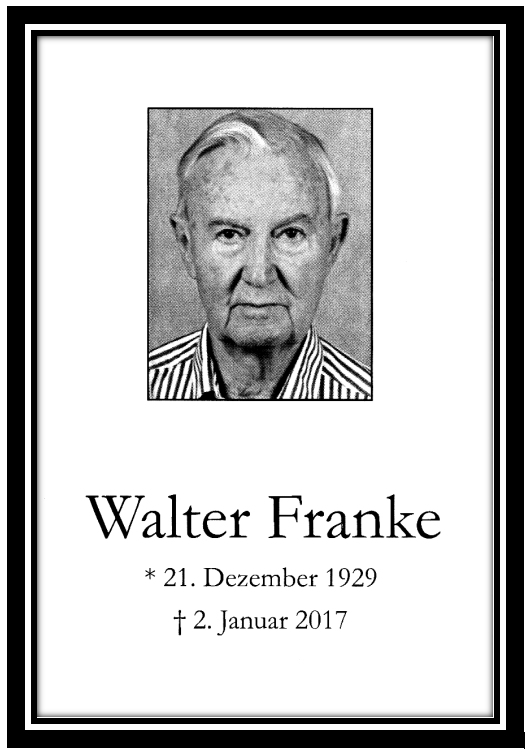 Walter Franke, extraordinary and legendary showman, died in January 2017 at the age of 87 years.

Walter Franke was one of the last great sideshow and illusion show proprietors of the last century. He represented the traditional sideshow business, which almost extinct on funfairs and festivals of today, like no other and with integrity and class.

Shortly after the WW II he traveled through the country with his marionette theatre, presenting his art mainly in community halls and local pubs.
Soon he also made a name of himself as a sideshow "talker"-  in cabarets and on the German fairgrounds - and in the 1950s he set up the show programs for numerous famous cabaret shows as well as in his own fairground shows.

Acts such as the burlesque "the bath in the champagne glass" - presented by his troupe of artists - and, above all, his own illusion performances such as the "living half lady" and "levitating lady" became famous on the fairs at this time.

At the beginning of the 1960s, Walter Franke founded his first own traveling Fairground Variety Theatre, with which he travelled in the following years at all the major German funfairs.

For those who saw him on stage his ability as a sideshow presenter/talker were unforgettable, as his skills as an illusionist, marionette player, and showman.

At the end of the 1960s Walter Franke settled down in Achern (Germany), where he spent many years and - among other things - opend the night cabaret  "Casino Royal".

However, permanent living in one place and an early "sedentary" lifestyle did not give him the happiness that his showlife and travels as an artist and showman had given him, as he often said that his work as sideshow showman is "not only a job, but a profession".

So in the early 1980s  Walter Franke once again created a mobile Fairground Theatre, named like his first show "Revue der Illusionen", which at that time was not only one of the most modern traveling sidehows in Europe, but also the biggest of all.

Walter Franke, with his "Revue der Illusionen" ("Revue of Illusions"), continued to tour all the major and well-known funfairs in Germany and beyond, among others the "Munich Oktoberfest" and the "Canstatter Wasen" - before he retired from his active career in 1994 and handed over the sideshow to the next generation. 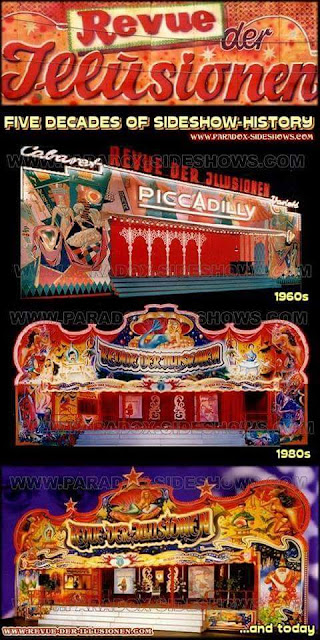 But even after his retirement  he always stood by with advice and help - with his approximately 70 years of experience in the field of sideshow and entertainment - until shortly before his death. It was his wish that this kind of entertainment, which decisively influenced his life, should live on the in future.

Revue Der Illusionen is Back